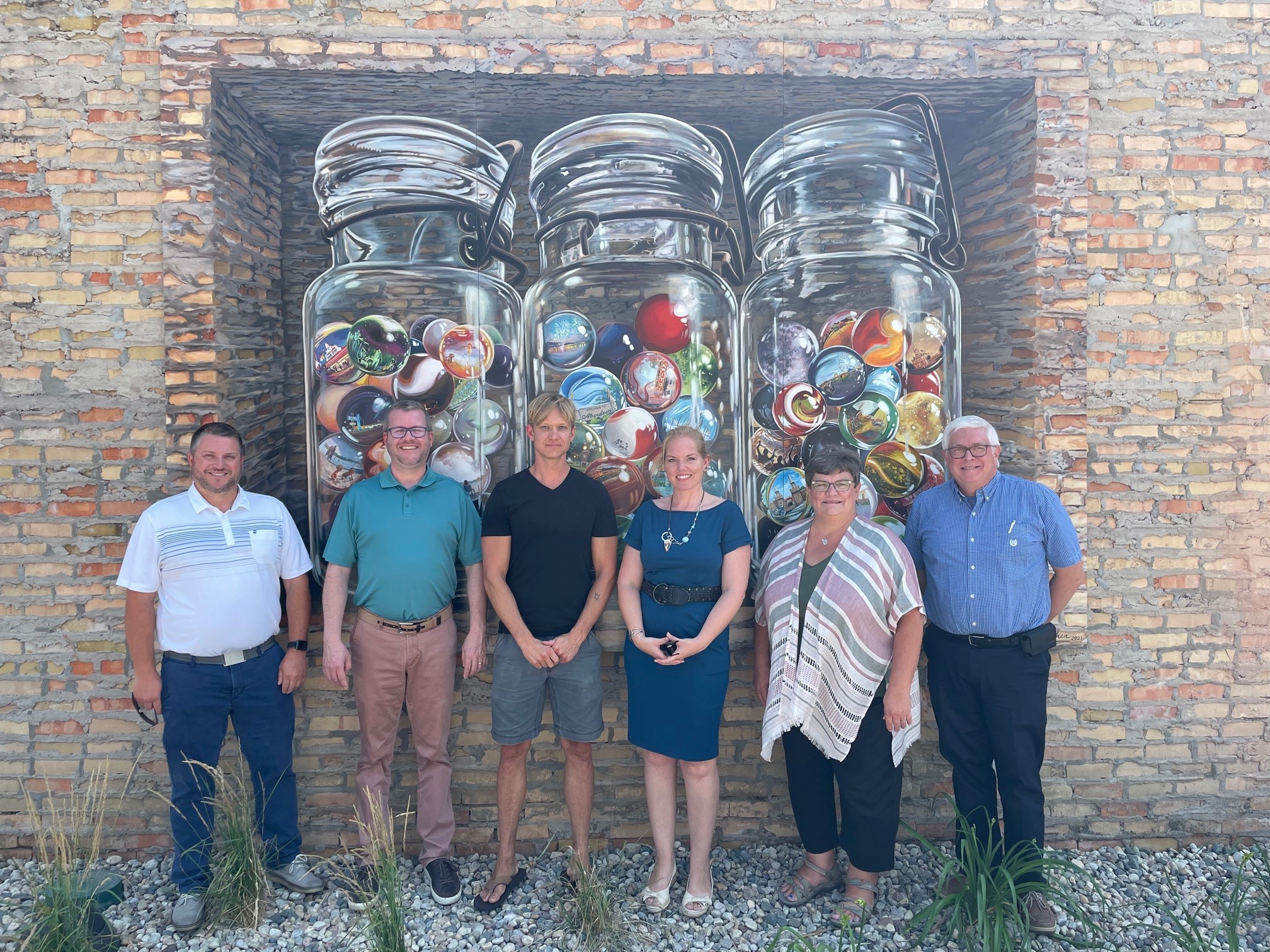 In the summer of 2020, the Aberdeen Area Community Foundation and the John S. and James L. Knight Foundation’s Aberdeen Fund in the South Dakota Community Foundation made grants to support the development of the Malchow Plaza in downtown Aberdeen. A key focus of the grants was the open air plaza area and the exciting new mural that overlooks it

Both grants were made to support the Aberdeen Development Corporation’s project to build the plaza on the site of the former Malchow’s Furnishings, which burned down in 2019. The AACF awarded $5,000 for the project, and the Knight Aberdeen Fund approved a $50,000 grant.

In fall 2020, the ADC partnered with the Aberdeen Area Arts Council in a call for art, and a judging panel chose a proposal from Aberdeen artists Nick and Nicole Fischer. Their mural imagines an inset shelf in the north wall of the new Aberdeen Area Convention and Visitors Bureau office that holds three large jars filled with marbles, many of which bear images of sights in Aberdeen. The Fischers installed the mural in June. Describing the project, the Fischers said, “We put the entirety of our hearts and souls into it. Very proud to live in Aberdeen.” They have named the mural “Collection of Memories.”

“The importance of community art in a downtown location is essential,” ADC CEO Michael Bockorny said. “During the development phase of Malchow Plaza it was clear the community wanted artistic features included in the finished product. Nick and Nicole’s mural fits our community so well. Everyday, I see residents and tourists spending a great deal of time viewing the mural and taking pictures. The ADC thanks the both the Aberdeen Area Community Foundation and the Knight Foundation for their contributions to this project.”

The AACF recommends grants for the Knight Aberdeen Fund, which Knight Foundation created through its Knight Cities program to support activities in communities where Knight Newspapers once operated. AACF board chair Heath Johnson said, “We knew the Malchow Plaza project would benefit downtown Aberdeen, and Knight Foundation saw the same thing. We’re proud to support it.”

About the Aberdeen Area Community Foundation

The Aberdeen Area Community Foundation was established in 1984 as a standalone 501(c)(3) nonprofit corporation with a goal of creating a long-term funding source for charitable causes in the local area. With careful investment, the fund will continue to grow and enhance quality of life in the local area forever. This fund is one of 80 CSAs in partnership with SDCF. For more information, visit  https://aberdeencommunityfoundation.com

About the South Dakota Community Foundation

SDCF is a public nonprofit organization established in 1987 and has helped people reach their philanthropic goals and strengthened communities across the state ever since. Today, SDCF manages assets of over $350 million. With offices in Pierre, Rapid City, Sioux Falls and Aberdeen, SDCF administers over 1,000 funds benefiting hundreds of charitable organizations annually. The Foundation distributed nearly $18 million in grants in 2019 which made a tremendous difference in communities statewide. This would not have been possible without the generosity of our donors. If you have a specific cause you would like to support or would prefer to give for the general good of our state, please visit https://sdcommunityfoundation.org/for-donors/ to learn more or call 1-800-888-1842.